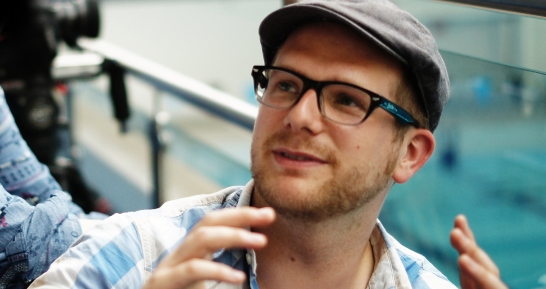 Adam Z. Robinson is a writer of theatre, short fiction and film.

He is currently working with musician Ben Styles (formerly of Backyards) on a new storytelling project. The Book of Darkness & Light  is a series of ghostly stories set to live violin music. After performing to over 1,500 people on Light Night Leeds in October 2015, the show received funding from Arts Council England to tour in autumn/winter 2016.

The show visited eighteen venues over more than twenty nights. Many of the shows sold out well in advance. Venues included The Old Fire Station, Oxford; Harrogate Theatre and Square Chapel, Halifax. The show will once again tour nationally in autumn/winter 2017/18, visiting more than fifteen theatres nationwide. The show is being produced by LittleMighty. Please visit the Facebook page for more information.

Adam is currently working on a new storytelling show, This Storm is What We Call Progress, which is to be directed by Fringe First award winner Dick Bonham. He will be resident at The HUB, Leeds; Square Chapel, Halifax and Harrogate Theatre during the research and development of the show.

His play Conscientious is toured the UK in autumn 2014. The play, directed by Alex Chisholm and performed by Rachel Ashwanden, was developed as part of the Summer Sublets residency at the West Yorkshire Playhouse and was supported by the Arts Council England. It was revived for a short run of performances in collaboration with the University of Leeds in June 2016. For more information visit: conscientioustheatre.wordpress.com/

He is author of several other stage productions, including Little Red (Edinburgh Fringe 2008) and Bad House (co-written with Lucy Arnold, NSDF 2010). In 2011 his radio play The Gibbet was longlisted for the BBC’s Alfred Bradley Bursary Award.

In May 2013, Adam was selected by Dead Ink publications as one of 20 “top writers under 40 in Leeds”. Two of his short stories ‘Gifted’ and  ‘Connivance’ are published in the LS13 anthology of literature.

In 2013, Go On My Son,  a comedy short co-written and co-directed by Adam (with Nick Coupe) and supported by the Roundhouse, was released. Showcased alongside Mark Grist’s Girls Who Read, the film was viewed over 20,000 in its first week of release.

In 2014, Adam was part of a three month placement in Madrid, working as an artist as part of BEAM’s ‘Arts Across Borders’ project. During his time there he wrote, directed and shot the indie art film Sueño con una tarde de verano.

Adam is also a photographer. You can find out more about his photography work at: www.pikchures.com.

He lives in Leeds.

Director Ed Rigg and Adam Z. Robinson on the red carpet at the Manchester Film Festival.

The Book of Darkness & Light